Just a short post tonight so you know that I am still around and have not expired.  I went before the parole board last night and was released this morning. What had the potential to be a relaxing and peaceful time following the trauma of Monday night was spoiled.  By physiotherapists.  Day 2 after the operation, when I was in loads of pain, saw the arrival of a different physiotherapist who tortured me right up to the moment of my release, three times a day. Whilst she didn’t cause me any more massive blood loss, she was no less a smartly dressed sadist than the first one.  She had a nasty trick of helping me with my first leg raise and then suddenly whipping her hand away whilst bellowing ‘Don’t you put that leg down until I say so’!  She couldn’t count either. ‘Four or five repetitions’ became nine or ten by the time she had finished with the ‘just one more’ trick.

It was a relief to get out of my room and practice with the sticks in the corridor, showing off my new boxers and blood-stained slippers. It was on one of my early solo expeditions that I found a room with a vending machine that dispensed excellent free hot chocolate. Indeed, one of the reasons that the Unfeeling One had chosen that hospital for me was because of the quality of its free hot chocolate which she drank in copious amounts whilst waiting around for me.  I also befriended a lady who had also undergone a knee replacement on the same day as me but it was to be a short-lived friendship.  I noticed that, as she became more familiar, she started asking me quite detailed questions about how my exercises were going and I finally twigged as to who she was when she started passing comments on my technique with the walking sticks:  she was a retired physiotherapist!  I had to abandon my hot chocolate (I needed both sticks) and flee back to my room.  She may have been criticising my technique but she couldn’t keep up with me.

The Unfeeling One turned up nice and early this morning, did my packing for me, and then had to sit there as we waited for the pharmacist to come and give me all the pain killers I am going to need.  Whilst we were waiting, I took her to the room with the vending machine and the foot tapping stopped for a while.  Eventually, the pharmacist arrived and handed over endless packages of drugs accompanied by even lengthier explanations.  I managed to stay with her but, just as panic was starting to set in and I was worried about over-dosing myself, I noticed that the Unfeeling One had her notebook out: what a relief. With a brief stop at the x-ray department to collect some piccies, and at reception to hand in my release chit, I was free!  This was what it was all for: a Smith and Nephew Genesis II Total Knee Replacement System as fitted into my leg.  Note the patella button on my newly resurfaced knee cap and the row of clips holding the wound together.

The Unfeeling One had brought Lyle with her which would have been great had he not simply barked at me, had a pee, and jumped back into the car.  Clearly he has had a great time with Mother of Unfeeling One and was not particularly impressed by my return.  I am glad no-one has told him he is ill because I was really worried that something would happen to him whilst I was away.  His ‘3 weeks to live’ has now extended to 11 weeks. The drive home was fairly uneventful, apart from the Unfeeling One experimenting to see how I would cope with an emergency stop:  not very well as it turned out.  She claimed that it was not her fault but, as I was dozing, I will never know.

Having pulled up outside the house, on the other side of the road, the Unfeeling One leapt out of the car, grabbed Lyle and took him inside.  She appeared very quickly again when she heard the squealing of tyres as traffic came to an abrupt halt in the road outside. Yours truly had decided that he couldn’t wait and set out across the road without the aid of a Lollipop Lady or any other form of traffic control.  My explanation to the Unfeeling One that there was nothing coming when I set out at my snail’s pace was swept aside as she felt obliged to apologise to the queues of traffic trying to get though the village.

No sooner had we got inside the house, then my mother arrived and she and the Unfeeling One started laying down the law and telling me what I could do and couldn’t do and when I could and couldn’t do it.  Tiredness starting sweeping over me at this point. It transpired that neither of them had any intention of staying with me in the afternoon (work and flower club preparation, obviously) and they were just ensuring that their consciences were clear in the event that I tried, for example, to come down the stairs, fell, and broke my neck. They had, after all, told me that I was not to go up or down the stairs under any circumstances.  Whilst at hospital, I got really fed up with an endless succession of people asking me if my bowels had moved and when asked the same question by the Unfeeling One, I started to react with increasing petulance.  When I was instructed that I was not to go to the toilet unless either one of them was around I told them that I would call out ‘Ive fiiiiiniiished’ when I needed their help.  That shut them up. With that, I went up the stairs, all by myself, and went to sleep in my own bed.

The picture below shows Lyle, totally unimpressed with my lack of mobility and speed, recognising the potential of my walking sticks. 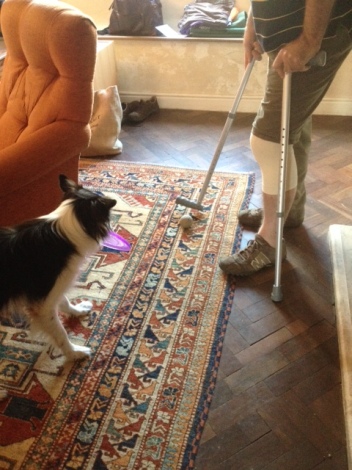